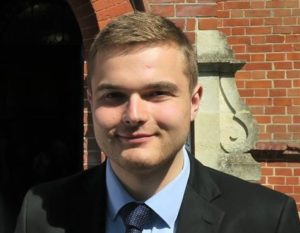 Born in 1996, William’s earliest musical training began in 2004, as a chorister at St. Mary’s Church, Oldswinford under Richard Hall. In 2016, he won a scholarship to study the organ with Prof. Henry Fairs at the Royal Birmingham Conservatoire, where he is currently in his third year. Important teachers and influences have so far included Thomas Corns, Prof. Martin Schmeding and Prof. Pieter van Dijk (organ literature); Alexander Mason (improvisation), as well as Paul Spicer (choral conducting).

William enjoys an active programme of solo and composite recital performances that in recent years have taken him throughout the UK and abroad, to such countries as Canada, France, Germany and The Netherlands. He is also active as a continuo player, performing regularly with the Royal Birmingham Conservatoire Baroque Orchestra and the Central England Camerata, in addition to freelance work across the UK.

An Associate of the Royal College of Organists, and a finalist at the 2017 and 2018 Northern Ireland International Organ Competitions, William is currently the Assistant Director of Music at the Collegiate Church of St. Peter, Wolverhampton, where he is the principal organist for the Boys’, Girls’ and adult choirs in their busy schedules of services, concerts, broadcasts and tours.