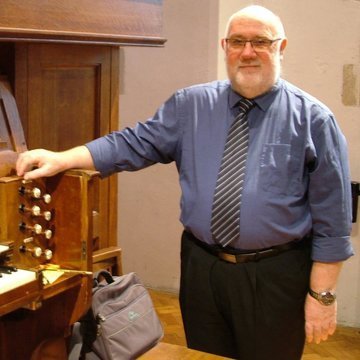 David Oldfield was born and educated in Sheffield, at King Edward VII School. He was offered an unconditional place at the Royal Northern College of Music where he furthered his organ, singing and choral training studies.

David worked in education for many years (often as Head of Music) has held several successful posts as organist and choirmaster and as a teacher of organ, piano and singing. As a performer, he has been organ recitalist, continuo player and accompanist. He has performed several roles on Royal School of Church Music courses since 1977 and more recently has been a member of the Advisory Board to the RSCM Council as well as being currently, an examiner for Bishops’ and Deans’ Awards.

David specialises in early music, Baroque music and 20th/21st century music but has an eclectic taste and wide repertoire outside this period. He made a special study of Tudor Church Music and also the vast choral repertoire of church music.

David has recently formed the choir Stag Montem Chorem who have already sung in Guildford and Portsmouth Cathedrals and he is Director of Music at St Luke, Whyteleafe, Surrey and Hon Associate Director of St Denys, Rotherfield. David is actively pursuing his interests as a recitalist and when time permits, can still be found driving buses and coaches, in particular vintage buses.